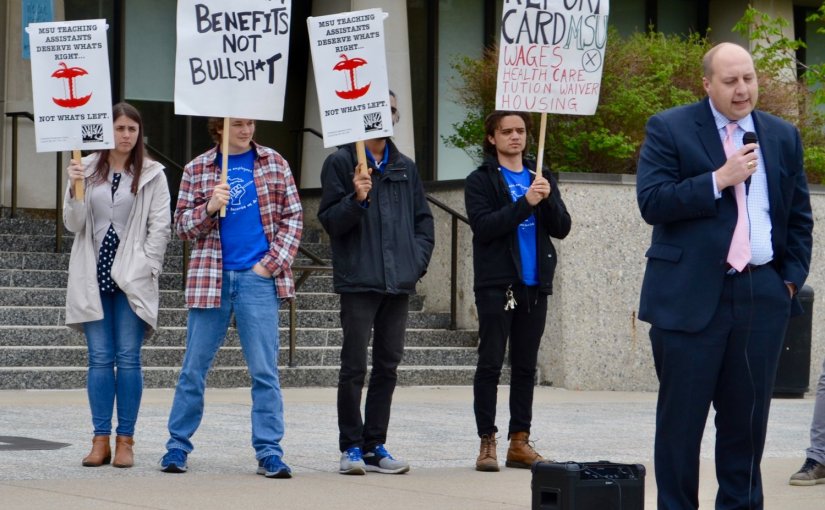 For college students across our state, the last few months have been rough. As many schools abruptly backtracked on their promises of in-person classes this fall, it was clear that pandemic life was far from over. While many fraternities foolishly decided it was business as usual, many of us had their hopes deflated. However, what many did not expect is that the shutdown would be far, far worse than just online classes and no (safe) parties. Over at Michigan, students tested for COVID-19 were forced to quarantine in apartments with virtually no supplies. More than 100 RAs declared that the conditions were unsafe. And while it would be easy to jeer at our normal axis of evil for being well, shit, this goes far beyond students’ usual issues with uncaring administrators. This was the University of Michigan putting their students’ safety and wellbeing in the direct line of fire.

The conditions at UM were so dire that on September 7th, the Graduate Employees Organization voted to strike. They demanded stronger COVID-19 remote work policies, as well as a 50% defunding of the Division of Public Safety and Security (DPSS) into community policing measures. The latter is ambitious for any campus, but now is the time to push for it, especially with Black Lives Matter protests still lingering from the summer.

UM reacted to these demands with open hostility. After the GEO struck down their initial settlement, the administration moved forward with an injunction against the union. Given the options to either end the strike or risk millions of dollars in damages and the potential dissolution of their own organization, the GEO settled. The strike was over.

Now that the dust has settled, what can we make of this on our end? It’s not as if we don’t have things to protest over: last month, MSU RHS furloughed around 700 student workers with only around two weeks’ notice. Soon after, the Spartan Solidarity Network released a petition and a list of demands, but neither have led to any change in the university’s policy. Besides this, tuition fees have gone largely unchanged, even as COVID shuts everything down to a crawl. Now is the time to either crack open the endowment or find some other way to relieve students in need of a stipend. As it stands, MSU remains fully committed to stiffing the most valuable members of its community.

It’s helpful to remember that our organizations are far from powerless. Earlier this year, the MSU Graduate Employees’ Union (aided by hundreds of professors and ASMSU) took a firm stance against Stephen Hsu, the then-Vice President for Research and Innovation who had been called out for supporting scientific racism, sexism, and eugenics, among other issues. After nine days of pressure on the administration, President Stanley asked him to resign and he returned to his tenured professor position. That isn’t as sexy as, say, Hsu being fired and falling off the face of the earth, but it is a case of a successful campaign waged primarily by student organizers against MSU administration. Saying the words “general strike” could be too soon. It could also be a great act of hubris, given that the university could be as willing to play hardball with students as UM was. But I still reckon that there is the potential for something great to happen if student orgs can converge for real action on campus.

COVID-19 currently shows no sign of letting up. For as long as it continues, universities across the country are bound to make more decisions that put the livelihoods of their students in jeopardy. The lesson of the UM action is that the forces behind these decisions are strong, but also that the GEO and organizations alongside it were willing to throw down to preserve the rights of their students. This is a lesson that student organizers need to internalize as hard as they possibly can. If the opportunity arises, we need to be as ready as possible to seize it.