If you, like me, have been trying to find a timesink as COVID-19 strips you of most worldly pleasures, you’ve probably come across discussions of Animal Crossing: New Horizons. After years as something of a cult favorite, New Horizons has burst into the zeitgeist as it became the most popular Animal Crossing title to date. That’s not saying that any previous title could be considered “indie” in any sense, but rather that New Horizons has become virtually unavoidable across game communities and social media. With that, the community has revved up into full force, with a surprisingly intricate online network that tried to meet the community’s material and social needs. Across Reddit and elsewhere, the game has formed its own online economy, down to a literal credit rating as a form of digital citizenship.

If you spend enough time in this space, and have your brain rot just enough where things start to fit together, some phenomena become visible. Namely, that it essentially crashed and rebuilt itself on two separate occasions since March.

The first noteworthy instance of this in the game has been the actual system of trading villagers. In order to ensure that their purchases are secure, players have set up their own systems to make sure that their transactions are cleared, as well as the oversight of moderators in order to minimize fraud. The community has its preferences that determine demand: mostly the conventionally cute animals or the ones that look like twinks. The demand for these villagers leads to most of them fetching high prices, but the market is kept in check by a sub-market of bootlegged Amiibos, allowing all villagers that existed up until the New Leaf (the previous title for the 3DS) to be spawned in.

And then there was Raymond.

In creating what many saw as the platonic ideal of the twink villager, Nintendo created a market frenzy. Unchecked by Amiibo exploits, the lengths that people were willing to go to were completely unprecedented, creating a whole subset of the community who devoted all of their time and resources to either getting or flipping him. Twitter had a ball. A bubble was created by both the people who were willing to do anything for Raymond, and the people who were more than willing to capitalize on it.

And then, one day, it stalled. For the last few days as of this writing, the #1 villager in the market ranking has been Marshal, a villager that is once again accessible through various spawn-in techniques that Raymond isn’t. If you go on most of the normal avenues, the average costs for Raymond are on the higher end, but not out of the ordinary for the top of the ranking. Inevitably, the fandom got  so sick of the Raymond craze that they drove the demand down several pegs on disgust alone. Alongside all of this, one hacker decided to just give Raymonds away to anyone who wanted him. The market had nowhere to go but up, until it suddenly plateaued. It hadn’t exactly crashed but was definitely in need of a come-to-Jesus.

The other, more obvious example of a crash came with the Turnip Market, cleverly named the Stalk Market. Turnips are an interesting mechanic in Animal Crossing because they serve as a kind of virtual stock market. Every Sunday people buy turnips as stores of value, and then, throughout the rest of the week, they try to sell them for a higher price than they were bought for. There are ways to predict what sale price your village will have throughout the week (shoutout to Turnip Prophet for their algorithm), but for the most part, the odds of a profit are random. The mechanic becomes an actual trade when people with high selling prices open up their gates and allow other players to turn a profit.

As the trade market grew on sites like Reddit or Turnip.Exchange, people started demanding more and more, let’s say, “ambitious” prices as a toll fee: it was not uncommon to see players throw up  hundreds of thousands of bells, entire stacks of turnips, etc. in commissioning their services. This created a barrier for players who don’t have much liquid currency, especially after putting it all into turnips. However, since the turnips expire after a week, most players are eventually going to have to sell if they want to come out ahead. And that means playing by their rules: even amongst the most extreme demands, some queues went into triple digits, exacerbated by people who were willing to use bots to secure spaces. 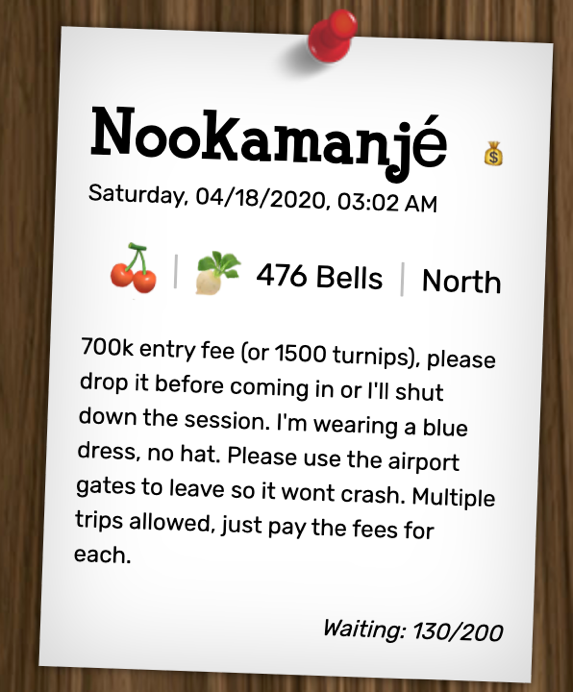 Once again, it didn’t last. If you go on Turnip.exchange during a selling day, it’s a ghost town. The only people selling there now are mostly just clearing at low prices, trying to hopefully make a little bit through tips. However, Reddit has fared much better: most people, even with high selling prices, have stopped using tolls and have just opened their gates to the public regardless. With a greater supply of people who are willing to try and be decent, anybody asking for toll fees probably wouldn’t get any traffic anyhow.

Determining what these situations actually mean is tricky, but that’s not to say there’s nothing there. To say that this is all a case study for capitalism digging its own grave would be overstepping it, given the insensitivity with equating real-life ecological consequences with a video game. And yet, there is something to be said about biting off more than you can chew. With the turnip and villager bubbles, the constant price-gouging of the product made the collective experience dreadful, especially for casual players. Both of these scenarios were met with the community banding together in ways that made access less tedious. In the absence of these schemes, it’s not unreasonable to say that the community has become more user-friendly. Games with bigger, more complex economies, like Massively Multiplayer Online Games, have the benefit of people being able to intervene if things start to collapse completely. Animal Crossing relies much more on the players’ actions, and that was eventually what brought everything to a standstill: the community deciding that these actions were sucking the fun out of the game. A flawed game can sometimes survive, but a community will die if the experience is dreadful.

New Horizons came out at a weird time for all of us, most of all people who actually bought it. The players collectively reaching the endgame quickly is a consequence of people playing it to death in quarantine, especially considering the game is a bit content-bare. This is bad for Nintendo in terms of keeping the lifespan of the game past a few months, but it’s also important that players learn this lesson as well. The community now has a much greater shot at preserving itself if it can learn that endless profit instead of moving the community forward won’t last.