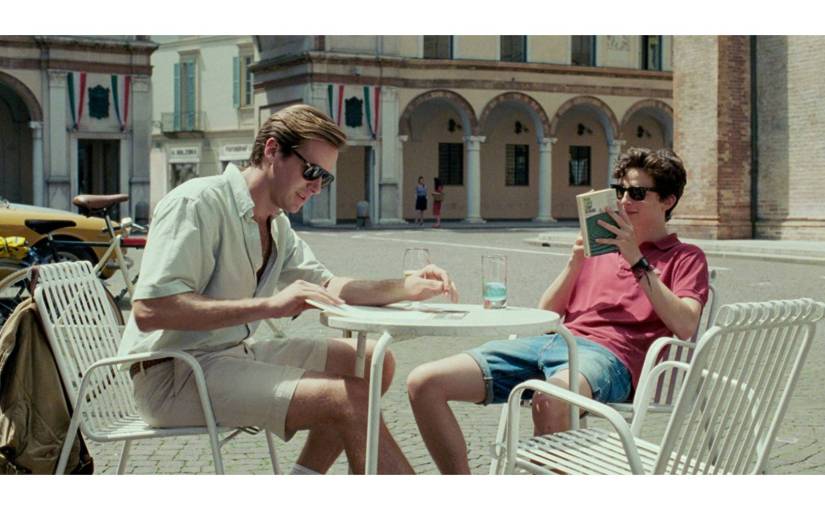 As I lay, half-baked and alone on the couch, watching Call Me by Your Name for the 6.9th time, I couldn’t help but think to myself:

I want to make it crystal clear that I would be more than willing to enter into a heated romantic relationship with Armie Hammer if it meant living in Italy, sipping on San Pellegrino Aranciata all day, and finger fucking peaches all night. I also have a deep desire to marry both Winklevoss twins at the same time.

Daydreams of riding bicycles in way-too-short shorts aside, I would like to believe that I am a mostly straight man. However, this does not mean that I haven’t been around the queer community my whole life. I have two uncles who are gay, and I was baptized by a gay priest who was my uncle’s partner. So, don’t ever talk to me about “praying the gay away” . . .

. . . unless you’re Armie Hammer, in which case I will gladly discuss “praying the straight away” as quickly as possible.

On top of my fabulous baptism, I am friends with many individuals who lie at various points along the spectrums of sexual attraction and gender identity, and they have always appreciated my openness and fairness in discussing their perspectives and experiences. These conversations have even opened my eyes to the possibility of my own sexual fluidity, given the amount of times I have been called out for my flaming bisexual tendencies.

Therefore, as a (mostly) straight ally, I want to talk about supporting the cultural development of sharing with others the pronouns with which you identify.

I wish to address pronoun politics today in part because I believe they are valid, a little bit because it acts as a proxy for gender politics as a whole, but mostly because this will undoubtedly piss off our conservative readers who managed to keep reading past my fanboy-ish attempt at erotica earlier in this article.

Think about it: Only insane people walk up to strangers and say “Hey, I know you said your name is Sergei, but you look like an Abby so imma call you that from now on.” That person is clearly incapable of functioning in a civil society. They should go back to finishing school to re-learn basic etiquette, as well as the answer to the eternal question: on which side of the plate does the soup spoon belong?

…Seriously, I want to know. I really need to impress Armie when we go on our soup date later.

In response to the socially conservative hatred of pronoun preferences, I would like to propose the following deal:

*Whispering in my sexiest bedroom voice* “Call me by your pronouns, and I’ll call you by mine.”

If people on the right are so insistent on neglecting the basic dignity of their fellow beings by refusing to call them by their self-identified words, then I would like to call them by whatever I choose.

I imagine the interaction would go something like this:

Thomas: “Hi, my name is Thomas. I am a man with a penis who attempts to date women, but I don’t feel comfortable calling myself a feminist since that’s kinda gay.”

Me: “Hello Thomas. You look like an average uneducated white guy, as is statistically likely for conservatives, but I am deciding to call you Lady Bird. You are in fact an 18-year-old raging feminist from Sacramento with mommy issues.”

Lady Bird: “Stop, sir, you are making me very uncomfortable. I don’t like girly movies like Lady Bird. It propagates foolish ideals such as female independence and is set in Sacramento, which is where the unabashedly progressive dictator of California, Gavin Newsom, lives.”

Me: “Lady Bird is a fantastic piece of cinema that speaks to all demographics and should be respected. Also, Gavin Newsom is not only a paragon of modern liberalism, he is also insanely hot and therefore should be worshipped like the queen he is. I therefore choose to instead address you as Baby Nut until you appreciate the art of theatre, you pussy.”

Baby Nut: “I do in fact love the art of cinema! Predator is my favorite movie because it is unabashedly masculine. It’s not some gay shit like La La Land.”

Me: “Would you like to see a movie about hypermasculinity that is objectively better than La La Land by having won an Oscar?”

An externally created self is an inherent enigma.

The basic right to one’s identity and autonomy is a fundamental part of what it means to both be human and to live in a society. If we deny people the right to self-identify, then why even allow people to legally change their names? Or have names at all?

If anything, your given name is the most un-American part of your identity since it was tyrannically imposed upon you without your consent, often by the literal patriarchy. Therefore, the social construct of given names is inherently fascistic, and we should embrace the concept of complete self-identification like the good postmodernists we say we are.

In conclusion, despite the amazing wordplay, I would sincerely ask that everyone reading this call me by MY pronouns, and I will call you by YOURS.